Tasker is generally defined as a task control and task automation app. However, it is not the only that part. It is an android programming based app but it doesn’t need any line of codes for its functioning. It is a user friendly app which lets you to create a mini android app by which you can bid. In this post we are going to help you in understanding some basic concepts by which you could program your android or tablet in such a way that you can use it effectively.

1)   Action – It is the basic element of the Tasker. You may call this as the combination of some functions which helped you to use your phone to do a certain thing as commanded by you.

2)   Context – It is a kind of situations or conditions which may complete the given program when they are true otherwise may not execute the program.

3)   Scene – It is nothing but a combination of layouts consisting of buttons, menus and different pop-ups.

4)   Variable – Some unknown thing which can change over time.

5)   Task – It is something provided by the users to do a specific thing.

6)   Profile – It is the combination of different tasks and context. If all the context linked to a task are true, the profile can run effectively.

7)   Project – It is a combination of above written things.

It is basically a combination of different tabs and menus. 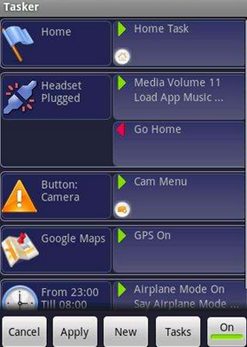 The use of the Tasker is very difficult for a new user. However for those who are using Android frequently it is quite simple as the tabs in the main menu are self-explanatory.

You don’t have to know anything other than the terminology given above to understand the things correctly. As written above in the terminology, when you installed it for the first time there are three terms indicated initially.

Here in Tasker we have three modes:

1)    Beginner mode: Here you have the three buttons i.e. Search, Add and help.

2)    Non-beginner mode: Here you have the default project tab (which can be accessed by pressing Home button), the Add button with a number of variables. Tapping on the main menu opens a new screen with some options to import files.

3)   Advanced mode: It is operated when the beginner mode is disabled. Tapping here opens a menu with buttons like: Add, Import, Rename, unlock etc. The functions of these buttons are mentioned below.

In the next section we will tell you more feature about the Tasker.