There are many people who do not have any knowledge about music. Giving them an instrument to play will be a sin. They will kill it. But, they are quite well with the sequencers. They will be able to produce a piece of music out of it. The beat is not required to be kept because this is done by the sequencer. All the notes will go well together. The person will become a good music composer with just a one thing and that is a music sequencer. Android has been rolling out new apps for everyone and this one is surely for the musicians. The free app from android- Rolling Tones is simple to use and you will create a piece of music before you can even come to know about it.

Introduction: The Google play page describes that this app is based on ToneMatrix. This is a flash based music sequencer released in 2009. Both of these are Tone sequencers, but the Rolling Tones is much advanced than the Tone Matrix. In Tone Matrix, composition of a single segment is possible, but with the Rolling Tones, an entire song can be composed. In fact, another app Groove mixer is much more similar to ToneMatrix than Rolling Tones.

The launch screen of Rolling Tones looks like the screenshot below which has a lot of space for the music. 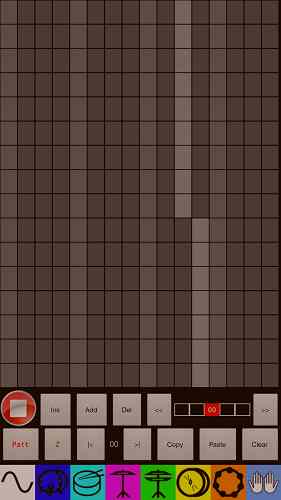 For making a note, all you have to do is to tap on the screen. The sequence is played by 120 beats per second. For creating another note, tap on any other place. The screenshot of the created music looks somewhat like this. 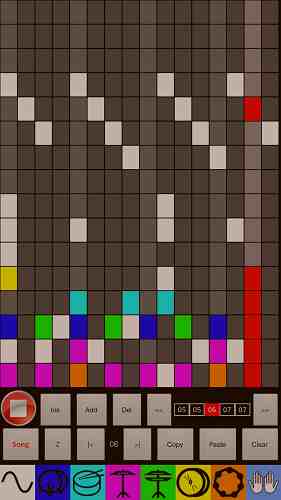 There are eight instruments available on the screen which you can see on the screenshot above. They are denoted by different colors. This sequence is the part of the demo song which is actually present with the Rolling Tones. The matrix can be easily understood. The horizontal axis denotes the position of the note in the sequence and the vertical axis gives the pitch. When heard they are bit confusing. But, using it for sometime will make you accustomed to it.

The simple sequencers are not much useful when a song has to be made. Because as the sequences are made they play again and again which seem monotonous but a song cannot be sequenced and created. With this new app that is possible. The screen shot looks like this.

You can insert or add a sequence or delete it. The number of segments is shown. You can even copy, paste them. You can even switch between working on a sequence and playing a song. The controls look very simple, though you might face problem with their use. If you keep on practicing, you would excel in it.

The Rolling Tones also comes with a Help page which provides all the information regarding the functions and the buttons. Even audios which are the sample songs are present which will help you the best to create your artwork.

Overall, this app wins, but looks wise it is a bit outdated. The functionality is however very impressive. If you are hard core android user, you should surely give it a try.