Mobile Hidden Camera is the most powerful spy Camera ever. It is a professional app with more than 3M downloads and rating of 4.5 Stars out of 5. It is used for super safe stealth shooting as well as video Recording. The spy camera of this app is developed by sophisticated Unified Spy Engine which supports all types of Android devices. Whenever you are using this feature, other people would not be aware of this that you are spying on them through your Android phone. It is a fantastic spy camera keeping your files and folders at a safe and secured place. It doesn’t allow the internet connection. There is one another astonishing thing about this app and that is you could use this app without any disturbance i.e. it doesn’t come with ads.

The interface of this app is designed in a very intuitive manner keeping all the basic things arranged and easy to understand. A screenshot of this app is shown below: 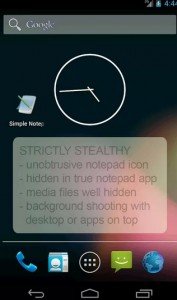 How to install this app

You can install this app to your Android devices by using a simple notepad with an unobtrusive notepad icon. Nobody ever knows about it that you have a spy camera installed in your device. Again, as it is hidden from the recent apps list, no one is going to find that you were using any spy camera. You can hide this app in a fully functional notepad also letting other peoples far away from reaching this app even if they reach your device somehow.

How to shoot or record any event using this app

You can use the advanced settings option of this app to make both front and back Camera available for shooting purposes. When you were recording video using your spy camera, there would not be any shutter sound, flash or preview available. It allows you an awesome and continuous recording with adjustable frequency present in this app. Recording a video using this app is really very fast which you can confirm by just seeing as it records 10 images per second. The video quality of shoot video is of high quality. There is a very special feature which is present in this app and that is it can auto-split the recorded video in multiple files by passing file size limits on any devices. You can decide the time limit for any video to run and your recording will be stopped at the pre-set time limit.

During shooting any video, all the other features are stopped allowing the shooting to go in a nice and effective way. Even the phone calls, SMS, email alerts etc. are blocked during the shooting process. You can switch off the keypad backlights, and the screen lights to make your Android phone look completely normal. You can use the outside volume buttons to do the image and video shooting by which the persons in front of you would not get even a slice of information that he is being spied. You can customize the whole menu labels as well as the main screen of your mobile using this app. Thus, this app gives you a nice and risk-free way to spy on someone through image or video. It is a superb and super fast shooting video app.

This app has offered you a very nice feature using which you can erase all the shoot images or videos in a very quick and hidden way so that you could save yourself in case if you are doubted or caught by someone.

Salient features of this App

Note: This app is developed for covert security applications. Never ever try to use this app for any type of illegal activities.

Mobile Hidden Camera is a very nice application to shoot videos for important purposes. There are compatibility modes available here in this app which are present here to boost app reliability & performance on various devices & Android versions. This app also supports ticket system which can be used to send the log files for the diagnosis purposes to the developers. You can download this app to your Android Phone by getting the access to the link provided below: