Skype is a leading tool that provides an opportunity for users to make video calls or VOIP calls almost on every platform like windows Phone, Smartphone and iPhone. But, it had not offered a chance to Record Skype Video Calls or audio automatically. Now a solution has come up because Skype has introduced free of cost application named Free Video Call Recorder for Skype. This application works on Windows version and lets Skype users to record Skype calls either video or audio during talking with a single click.

How to Record Skype Video Calls

The application offers to record Skype calls in the following modes. Using this application, Skype users can choose any mode of recording simply as per his necessity. 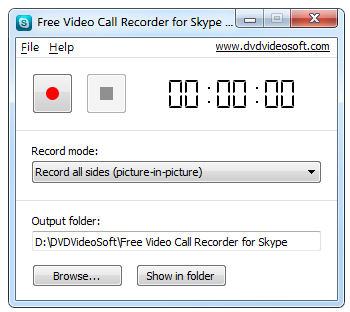 Before installation of the application, Microsoft Dot Net Framework SP2 or its above version must be installed for its support.

How to access Free Video Call Recorder for Skype application?

The recorded video calls are stored in MP4 format and audio calls are saved in MP3 format. Thus, both recording items can be watched or listened time to time by the media player within windows system.