Within this week, insiders will experience the second update – Windows 10 Build 18348 (19H1) in Fast ring. The build includes a solitary feature Emoji 12.0 and multiple fixes such as for Start menu not launching problem, Edge crashing, and other.

You will get Windows 10 Build 18348 automatically if you have chosen Fast ring. Still, you haven’t received then go to Settings => Update & Security and click on Check for updates.

The current Build 18277 introduced Emoji 12.0 which was finalized in early February by Unicode. You will experience the emoji now having keywords hooked up. These include ballet, otter, sloth, shoes, waffle, and more. 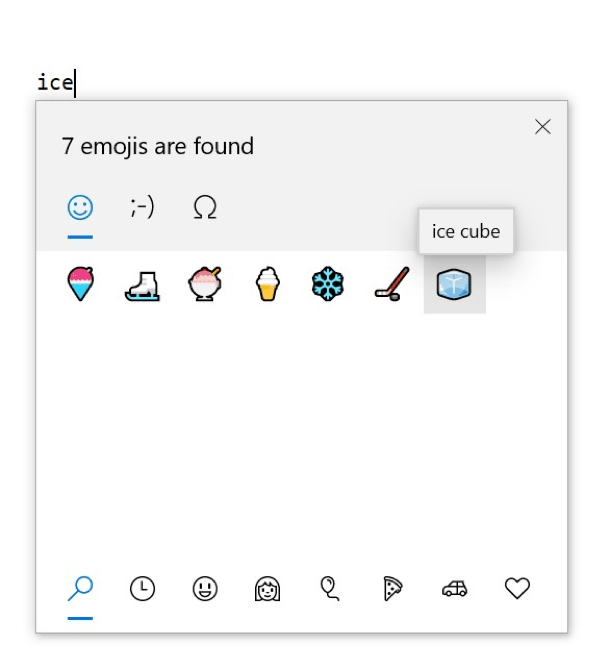 In the emoji picker, searching for ice will display 7 results, one of which is ice cube (new emoji).

Also, try the new Symbols and Kaomoji section in the picker.

Important – The build is rolling back the new Settings header to 50% from 100% to 50% on Home and non-domain joined Pro. This is for testing side by side comparison to evaluate quality. We’ll let you know when the rollout increases again.

If you received any build in Fast ring level and then attempt to switch to the Slow ring, optional content, for example, enabling developer mode will no longer work. You will need to persist in the ring to install/add/enable the content. The reason is optional content will only install in builds targeted for particular rings.

Microsoft has locked down the inbox apps for the upcoming Windows 10 1903. Their simplified versions will come with the release of the April 2019 update. Therefore Windows Insiders may have noticed certain features missing from these apps. This situation may occur with Photos app. But Insiders can restore these features by navigating to the settings of the inbox app and selecting the Join preview button.