AlphaJax is an app that perhaps brings the most amazing scrabble word game memories associated with our childhood when we used to play it on board with friends. Well for those who have been loving this game not only for enjoyment but for the love of words Windows 8 has launched AlphaJax that is similar to the Scrabble game. It is a free app for Windows 8 and comes with an undesirable ad display.

Coming to the game interface it has the basic design similar to the scrabble (an online version to say so), but with added features that are pretty instinctive too. So there are apparently no issues with it and it functions quite well. You could download it from the Windows 8 Store. A screenshot of this app is shown below: 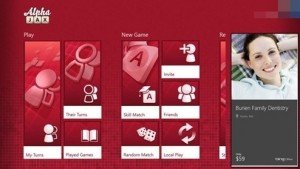 How to use and play in AlphaJax app

After you have installed it from the Windows store the only prerequisite is a Microsoft account that is mandatory to log into the game to play it online. Now based on the basic principles of scrabble board game the game introduces a set of seven different letters each associated with a number. So for instance, if you make APE where A carries 6, P carries 10 and E carries 5 points, the word totals to 21 points (pretty easy).When you launch the app the above kind of interface opens up where you can see all the modes that are available in the game. The game supports many games at a time so you might be playing like 10 games simultaneously if you want. A brief on the sub-topics is given below to present you with the idea of the game setup.

Under the Play option you have My Turn which shows the turns that you have to play in the games that you are playing. You just have to click on the game proceed with your turn. A counterpart Their Turn is also on this section where the only difference is that it shows the turns that the opponent has to play, and you are on the wait (the interface is similar for both). Another section Played Games give you the vignette of the games that you have already finished.

Under the New Game option you can create a new game and then there are sub-sections attached to it. Skill Match sets your match with an equally challenging opponent who is at the same level of achievement thereby increasing the level of toughness. You can use Invite to play the game by inviting other players. And of course you can play with your online friend too.

Statistics gives detail about your achievements and the games that you have unlocked. The screen shows your rating and position on the leadership board.

Key Features of this App

AlphaJax is an absolute fun for a word game fun although the ad free version could have been much better, but it surely is a learning game along with the fun part.