The Gunstringer has its original development as the Xbox Kinect game designed by Twisted Pixels having tremendous success. With his huge reputation in the gaming world it has entered into the mobile world with an app based for Windows 8 with all its spectacular features and graphics. It is a game that develops itself following a storyline where the main character the Gunstringer, a skeleton cowboy marionette who was back-stabbed by his former posse returns to take revenge with his trusty pistol and firm resolve for the wrong deed that was done against him. It was earlier decided to set a price for this app but for now it is a free app that can be downloaded from the play store.

The game starts with a theatrical imitation revealing the great story behind the legend. The controls are simple and require no sophisticated understanding. The game will surprise you with its beautiful choice of colors and animation. A screenshot of the screen in between the game is shown below: 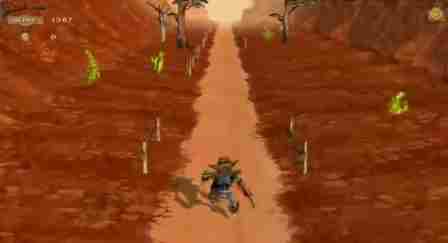 How to play this game

There are four main stages each divided into four sub stages making it a total of 16 levels. This version is a cut-out of the original version, but the theatrical theme and sound provides the perfect atmosphere for a game play. The game has an endless sprint and you just have to use the keyboard to dodge, jump and duck with the arrow keys while the space bar can be used to fire the frequently popping up targets and treasure chests. This game control is also compatible with the windows smartphones where you have to swipe accordingly. You have to tackle different obstacles and take fast shooting action as well as pillaging on the way.

The game maintains a leader-board so that you can challenge your friends into the game. You can also earn a diamond by playing for seven days in a row or buying them with actual money. These diamonds are useful and can be spend while making an achievement. There are customization available for powerful weapons that require loot.

Key Features of this app

Gunstringer is a nice run and chase gameplay. This is really a fantastic game to be played in leisure time. You will get a link below from where you can install this game to your windows machine.